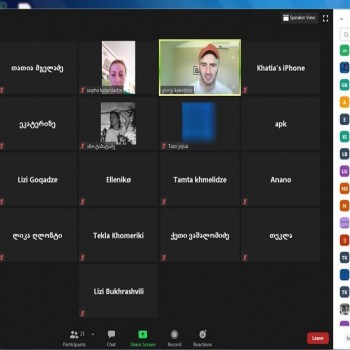 On June 30, the last meeting of the current academic year with the writer Giorgi Kekelidze was held for the students of the "School of Leaders". The topic of the lecture was "Circumstances that determine people's attitudes and values."

During the meeting, the writer reviewed the three main crucial periods of human development in the history of mankind and the relevant archetypes. How the thinking and values ​​of humanity were formed from "group thinking" to Stoicism, Sufism ... and basically what characterizes a postmodern person.

The writer noted that man is a creature of thought, the society forms thoughts transmitted to each other, and we are the "sum of texts" of these thoughts.
Modern man has driven everyday thinking out of his own life, lost his reflection of himself, and the huge amount of information that has hit him like a storm has caused a kind of crisis.

In the end, he advised adults to read the novel "Don Quixote" by Spanish writer Miguel de Cervantes.

The organization would like to thank Giorgi Kekelidze for the interesting cycle of lectures and will continue active cooperation from the new academic year!