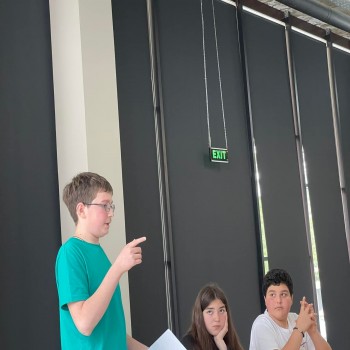 28 June, 2022
On June 27-28, 2022, the Karl Popper Debate Games were held for the youth of the Young Pedagogues Union's Leadership School, which was preceded by a workshop on debate techniques and topics presented for debate.
Debate resolutions were related to such topical topics as:
1. Electronic election system is the best way to ensure no-show hardship.
2. Women have less developed technological skills than men
3. In the informal economy, including women employed in the family, they are deprived of the opportunity to engage in business
12 teenagers participated in the debate.
The best team that will participate in the contest announced throughout Georgia has been identified.
The activity was held within the framework of the "Debate for Equality" project of the United Nations Development Program (UNDP).
Development of Civic Education for Teens