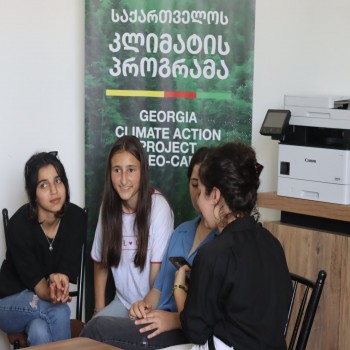 16 June, 2022
5 information meetings and trainings for 5 different public school students were held in the target municipalities of Guria within the framework of the EU-supported project Georgia Climate Program, implemented by CENN partner organizations under the initiative of Women and Youth.
In particular, trainings were conducted: Naruja, village. Gurianta, village. Creator, village. Kviriketi and Nasakirali public school students.
During the trainings, the participants received information on issues such as:
Water resources and climate change;
Climate change and human rights;
The role of renewable and energy efficient technologies in climate change.
In addition, a poster competition "Together for the Environment" and "Say No to Plastics" was announced as part of the initiative.
The main goal of the "Say No to Plastics" competition is to reduce the pollution of the environment with plastic waste and to increase public awareness on this issue in general.
Participated in the competition in Laituri, Naruja and Gurianta Public Schools. The winner, Gurianti Public School, was identified among the participants. The winning school will receive a 1500 GEL voucher from Elite Electronics.
The plastic waste collected during the competition was handed over to a local recycling company for further recycling.
The works in the poster competition "Together for the Environment" will last until June 30. The aim of the competition is to create thematic posters on the following topics: environmental protection, waste recycling and youth activities. Students of Ozurgeti Municipality school can participate in the competition.
More information about the competition is available at the following link:
https://www.facebook.com/.../a.10183508.../5208873655858448/
Development of Civic Education for Teens