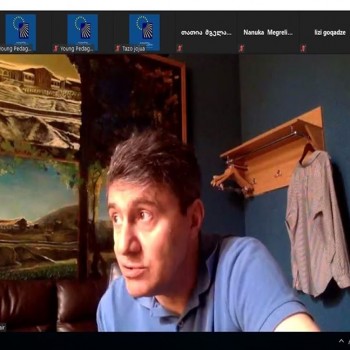 A meeting with Dato Turashvili on the topic of "Freedom"

On June 17, a meeting with Dato Turashvili on the topic of "Freedom" was held for the students of the "Leaders 'School" of the Informal Education Center of "Young Pedagogues Union".The meeting with the writer was planned according to the wishes of the teenagers, however, they read the work "Generation of Jeans", after which they prepared questions.The beginning of the meeting was dedicated to the mini-lecture. The writer introduced the teenagers to his definition of the concept of freedom, spoke about the Soviet Union as an evil regime, education as the main weapon of a free and successful country.After the mini-lecture, the meeting continued between the teenagers and the writer in an interesting question-answer mode.