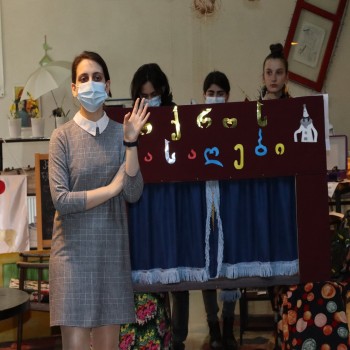 5 April, 2022
Another activity planned within the framework of the project "Raising Awareness on Women's Rights" funded by the Youth Initiatives Competition was attended by students from the Leaders' School and Naruja Public School.
Within the projects, a puppet show was presented (puppets and a script were created by the members of the project implementation team) and a discussion was held about the problems and challenges raised in the play. The play identified important issues such as gender roles, stereotypes, and the causes of women’s unpaid labor.

Micro grant was implemented in the project "Women's Power - Economic and Political Participation for an Inclusive Society in Georgia" implemented by "Women for a Common Future" in partnership with local organizations "Women's Fund in Georgia", "Women and Reality", "Young pedagogues Union", "Pankisi Women's Council In cooperation with "Racha Community Organization". The project is financially supported by the European Union for Georgia.
#EU4Georgia
Development of Civic Education for Teens