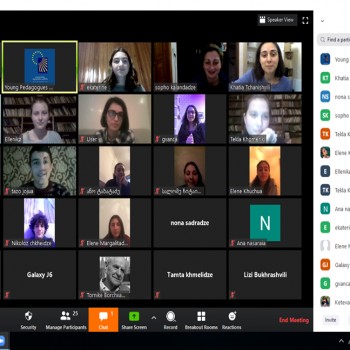 On May 8, a debate was held on the initiative and participation of Ozurgeti and Tbilisi branch students of the Leaders 'School of Informal Education at the base of the Young Pedagogues Union using the online platform (in Carl Popper format).

The adults themselves chose the resolution: "The current academic year should be declared an academic year by the state." The assertive and negative teams presented different criteria, which were substantiated by convincing arguments.
The affirmative action team focused on the possible inequalities of students, increased health risks, and the possible improvement in the quality of learning during the academic year, while the rejecting team relied on the benefits of the state's current steps and intensive use of technology.
At the end of the debate, the representatives of the educational component of the organization evaluated the controversial issues raised during the debate, introduced the views, recommendations, as well as various ways and examples to help the adults to better justify their position.