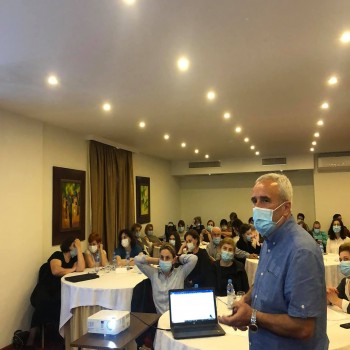 Workshop with representatives of partner schools

14 June, 2021
On June 13 of this year, a workshop with representatives of partner schools was organized by the A (A) IP "Young Pedagogues' Union". The meeting was attended by representatives of the villages of Ozurgeti Municipality, in particular, Shemokmedi, Nagomri, Meria, Kviriketi, Naruja, Gurianta and Chokhatauri Municipality, Guturi village school.
Involve the school principal, teachers, parent and student in the workshop from each school.
In the first part of the meeting, the final report of the research conducted by the organization - "Factors influencing the involvement of girls and boys in informal activities in the process of gender socialization" was presented. The main findings of the study were discussed, followed by discussion and discussion.
In the second part of the workshop, school representatives prepared a working version of the school gender policy document.
For the future, the process is planned in such a way that with the involvement and consultation of the representatives of the organization, the partner schools will develop and approve the final document of the school gender policy. It should be noted that the creation and implementation of such a document is a precedent in Georgian schools.
Development of Civic Education for Teens